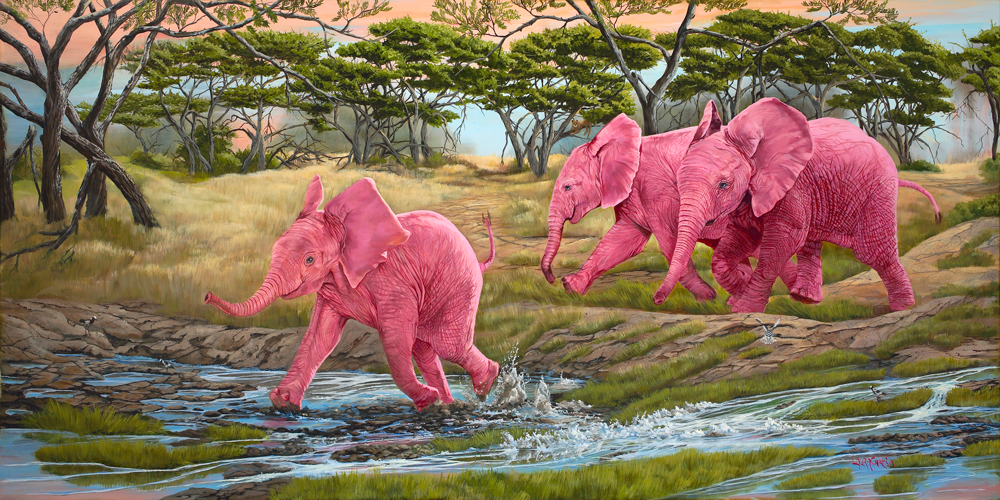 I think it was the fog. Maybe it was just too early in the morning to be up.  It was the third day of the safari and I hadn’t slept very well since arriving in Africa.   It had been so hot during the day and on through the night. That strange third morning the fog set in on the plain and it was so cool I couldn’t resist going for a short walk.  I grabbed a whistle to call for help if I encountered something dangerous and wandered off from camp alone.

It was so quiet in the early morning and at first I didn’t understand that I was hearing the sound of animals pounding towards me.  I hesitated a fraction of a second to blow my whistle for the guides and out of the fog three baby elephants appeared running at a full charge into the small span of water in front of me.

“No, it can’t be” escaped under my breath “they’re pink.”  Are there such things as pink elephants?  Are they covered in dirt or something? Confusion clouded my thinking and then it didn’t matter, they were gone. I felt silly but I blew my whistle anyway.  John the guide was by my side in seconds, worried, ready, curious that there seemed to be no danger.  “Oh my gosh, I just saw three pink elephants running through the water” I babbled. John laughed, “What are you drinking Ms. Curtin?”  “Nothing!” I cried.  “For Real! I saw them.”   “It’s the light. Colors look odd when the sun is coming through the fog this early in the morning”  John tells me as if I’m blind. “Odd? They were bright pink. Don’t you think that’s a little more than odd colors?”  My words were no use. He didn’t see them.  He would never believe me.

So here they are, straight out of my wild experience that crazy morning, just as I remember them.  You tell me, are pink elephants real? If they aren’t they should be. Enjoy my fantasy.